Learn how we’re evolving our energy mix for the future and reducing our carbon dioxide (CO₂) footprint.

We are excited about the many positive impacts the transition to clean energy will bring to our customers and communities – from avoiding long-term costs to growing the economy and improving the health of the environment. Here are answers to common questions, along with stories, information and news about our programs.

We’re proud to share that our efforts to make our communities more sustainable have not gone unnoticed. See what news outlets are saying about the Clean Energy Blueprint. 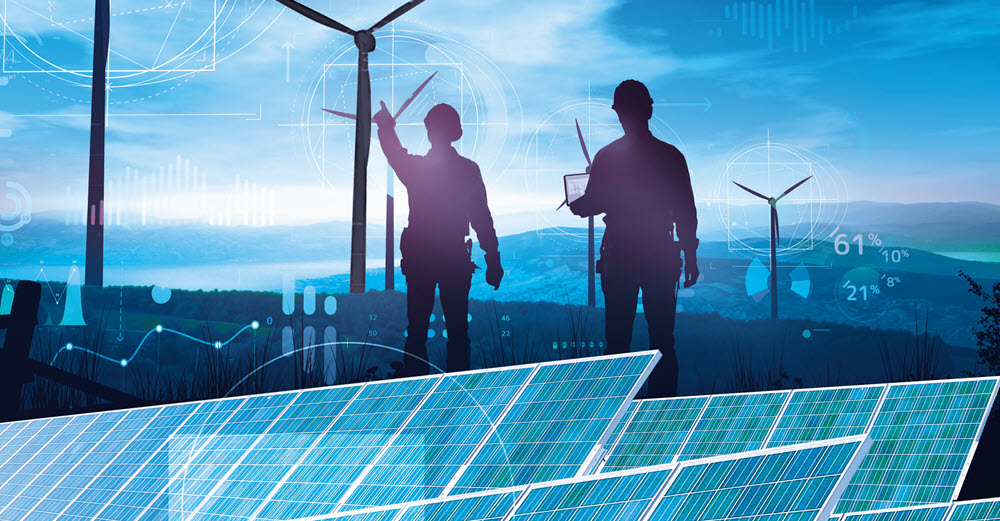 Read more at dailyenergyinsider.com
Alliant announces plan for 1 GW of Solar in Wisconsin
Wisconsin-based Alliant Energy has announced a plan to add 1 GW of solar power generation to its portfolio by 2023.

Read more at powermag.com
With PSC Approval, Alliant Set to Become Wisconsin’s Premier Solar-Powered Utility
With the Commission’s ruling under its belt, Alliant has secured all the necessary permits to set in motion the first wave of a massive solar deployment across Wisconsin.

Read more on Urban Milwaukee
Alliant Energy to retire Sheboygan coal generation facility, add six solar projects in Wisconsin
By the end of 2022, Alliant Energy intends to retire its coal-fired, Edgewater Generating Station in Sheboygan, Wis., and, as part of a plan to install 1,000 megawatts of solar by 2023 announced plans this week for six new solar projects amounting to 675 MW.
Read more at dailyenergyinsider.com
PSC approves Onion River, five other solar generating projects
A 150 megawatt solar generating project in Sheboygan County is still under review for construction, but it reached a major milestone on Thursday as the Public Service Commission of Wisconsin voted unanimously to allow Alliant Energy’s subsidiary, Wisconsin Power and Light Company, to acquire or construct, own, and operate a total of six solar generation facilities in Wisconsin.
Read more on WHBL.com
National Grid Renewables to sell solar project to Alliant Energy
National Grid Renewables, which includes the renewables development company formerly known as Geronimo Energy, has announced the sale of Springfield Solar in Dodge County, Wisconsin, US, to Alliant Energy.

Read more on Radio Iowa
Alliant Energy to retire Lansing coal plant, plans to expand solar power
Alliant Energy plans to close its coal plant in Lansing by 2022 and transition its Burlington plant from coal to natural gas by 2021 as part of the utility’s effort to transition to more renewable energy, the company announced Thursday.

Read more on the The Gazette
Alliant to build 400 megawatts of solar in Iowa, retire Lansing coal plant
The Madison-based company said Thursday that its Iowa subsidiary will retire a 275-megawatt Lansing coal plant south of La Crosse on the Mississippi River by the end of 2022 and convert its 212-megawatt plant in Burlington to burn natural gas next year.

Read more on the Wisconsin State Journal
Local solar boom part of larger trend; two new area sites announced
Alliant Energy said this week it plans to build two new solar farms, one west of Beloit and one north of Brodhead. They would start producing electricity by the end of 2023.

Have a question about the Clean Energy Blueprint? Wondering if our investments will affect you? Find the answers to a wide range of common questions below – and if you don’t see the information you’re looking for, please send us your question. We’d be glad to help.

What is the Clean Energy Blueprint?
The Clean Energy Blueprint is our plan for accelerating our transition to produce more clean, renewable energy reliably, affordably and sustainably. This is especially important as we work to sustain the economic and environmental health of the communities we serve. Moving forward by expanding solar energy means reducing our long-term reliance on coal-powered generation. Clean energy is affordable and will deliver sustainable benefits to customers for decades to come.
Why accelerate the transition to solar energy now?

It is a smart choice for our customers! This also positions us to achieve our carbon emission goals. There are several reasons we are accelerating our transition to solar now, including:

By expanding our renewable resources now, we will be poised to thoughtfully transition to cleaner fuels, while continuing to provide safe, reliable and affordable energy for our customers.

In addition, the communities we serve will benefit from sustainable and innovative energy solutions now. Many large industrial customers and communities have their own corporate sustainability goals. Increasing renewable energy availability helps keep – and attract – businesses to the area and creates lower energy costs in the long run.

Is clean energy reliable?
Yes. Solar and wind complement each other. Both generate electricity without requiring the need to import fossil fuels. Wind is typically stronger at night while solar provides the most energy in the heat of the day. Dispersing the electricity they generate across the region increases overall reliability. We also have natural gas-fired power plants that can meet energy needs when the sun is not shining or the wind is not blowing.
What is the timing for your new solar investments?
In Iowa, we plan to add up to 400 MW of solar by the end of 2023.

In Wisconsin, we plan to add nearly 1,100 MW of solar by the end of 2023.
Have you selected developers to construct the solar sites?
Visit our Iowa and Wisconsin solar pages for full details.
How will accelerating the transition to renewable energy help avoid future costs?
Investing in renewable energy generation now is more cost-effective for customers in the long term. With renewable energy, there are no fuel costs. They require less maintenance and labor. At the same time, this transition ensures ongoing safe and reliable delivery of the services customers count on most.
Will investments in sustainable energy affect customer bills?
By investing in solar energy now, the long-term net result is more cost-effective for customers. Our plan is well-designed to reduce future costs of powering older coal facilities and aging distribution equipment. Solar and other clean energy resources are only part of the total cost of delivering energy. While clean energy resources will cost less in the long run, other costs will continue to fluctuate.
How soon will customers see an impact from clean energy generation?
Investments are phased over time. Customers are likely to see an initial increase in their rates shortly after the new solar projects are fully operational. Over time, they’ll see lower costs than they would have compared to the cost of continuing to operate our coal generation. This is because solar energy has no associated fuel costs and has a lower cost to maintain and operate, lowering customer costs over time.
Will customers pay for coal plants that are no longer used?
There will be some costs associated with plant closures. However, they will be lower in both the short- and long-term as our Clean Energy Blueprint helps customers avoid expenses and investments that would otherwise be required to keep these facilities operational.

Why is Alliant Energy investing in the energy grid?
The energy grid we’ve operated for more than a century was designed for large generating facilities delivering one-way energy to homes and businesses.

Today’s grid includes thousands of customer-owned solar and wind generating systems, which require two-way flow of electricity and information in order to provide customers more control of their energy use. The grid must be flexible and adaptable to accommodate new technologies, electric vehicles and the expanding array of interconnected web-enabled devices customers are using at ever-increasing levels — all while providing safe and reliable energy service to all customers.
Does fiber play a role?
Yes. In fact, upgrading our communications network with fiber allows us to create better, faster and stronger digital highways between our facilities. Just about everything connected to the energy grid will be digitally communicating with everything else, and it’s more data-intensive than ever before.
How do customers benefit from moving power lines underground?
Moving power lines underground offers customers many benefits, including more reliability. When Mother Nature strikes, fallen trees, high winds and ice can damage the overhead power lines, creating outages. Once underground, the impact of weather is virtually eliminated, making power more reliable. In addition, once underground, the lines are more affordable to maintain over the long term.
How is Alliant Energy investing in communities?
We are guided by our purpose-driven strategy to serve customers and build strong communities. We are investing in communities by creating jobs and driving growth through the energy solutions we provide. We provide communities with resources, assistance and charitable donations. We partner with communities to identify their needs and help solve problems. Our investments strengthen communities and help make life better for others.
What is the focus of your foundation giving and volunteer support?
We partner with our customers and the communities we serve to identify and help solve problems. We also look at ways to create opportunities that help make life better through our grant and scholarship programs. Through our Community Grants, we support nonprofits and community partners in four major categories: Hunger and Housing, Workforce Readiness, Environmental Stewardship and Diversity, Safety and Wellbeing.
This content may contain forward-looking statements.
Have a question or need help? Visit our Help Center.

from any U.S. Cellular® phone